As the head of a medieval monastery, your goal is to assemble the greatest book collection and build the most famous library.

Use your limited gold wisely to acquire the necessary pigments for decorative lettering, hire the best copyists and reproduce the most precious works!

Your goal is to win the most victory points by having the highest total score in one of the five categories: pigments, holy books, monks, manuscripts and forbidden tomes.

The game is split into two phases.

Gift phase
Allocate the designated number of cards (according to player count) and then give the remaining players an opportunity to draw a card. When you allocate a card it is placed in one of three locations:

Once all the cards have been picked from the public space, then your turn ends. The player to the left then becomes the active player. Players continue taking turns in the gift phase until the draw pile has been exhausted.

Auction phase
Reveal the topmost card of the draw pile and lay it face up at the centre of the table. Then all players bid for the card. The highest bidder pays the bid amount by discarding a certain number of cards from their hand.

Once all the cards in the draw pile have been purchased or discarded, it’s time to add up your points for each of the five categories. The player with the highest number of points in each category wins the victory points for that category and takes the corresponding die from the Scriptorium.

When the winner of each category has been determined, the players add the numbers on their dice. You win the game if you have the most victory points!

Be the first to review “Biblios” Cancel reply 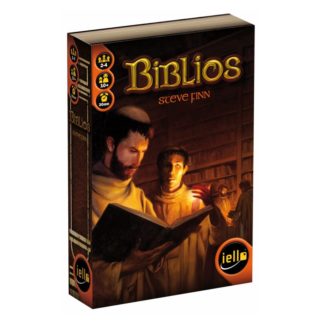