BrainBox Football Kids GamesPlayers will have 10 seconds to study a card before being asked a question from the back, chosen by the roll of the die. If the question is answered correctly the card is kept, if not it is returned to the box. The player with the most cards after 10 minutes wins the game!BrainBox Football Kids Games is a brilliant memory recall game that lasts just 10 minutes with rounds of ten seconds. Club history, famous players, fun facts and more! Features 71 football clubs from the Premiership, Championship and Leagues 1 and 2.

Be the first to review “Brainbox Football” Cancel reply 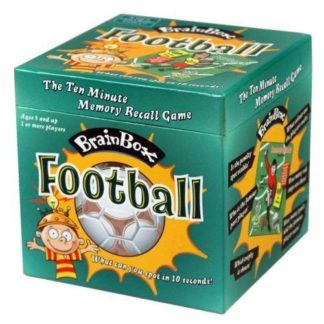