Rice and dice! Roll with your favourite Sushi Go! characters in Sushi Roll, a dice-based version of the best-selling card game!

Load up the conveyor belts with savoury sushi dice – then pick one and pass the rest! Earn points for winning combos like two tempura or a set of sashimi. Grab a menu to re-roll your dice or use chopsticks to swap with an opponent. And be sure to save room for pudding at the end!

To start a round, you all pick up your dice and roll them at the same time. The number of players and number of dice always adds up to 10 – handy tip! So if you’re a 3 player game, you need 7 dice each.

Once rolled, place all your dice on your conveyor belt without changing the faces. The player with the red conveyor belt gets to go first!

On your turn, perform the following two steps in order:

Once everyone has taken a turn, slide your conveyor belts (and the dice on them) to the player on your left. Re-roll and go again! Once all the dice have been used, it’s time to score.

Your scoring pad shows you what sets score what points. Collect the correct number of scoring tokens and place all dice back in the bag. Draw new dice for the start of the new round. Pudding still scores big! So make sure to leave room.

At the end of the third round, it’s time for the final scoring! Whoever has the most points wins.

Be the first to review “Sushi Roll” Cancel reply 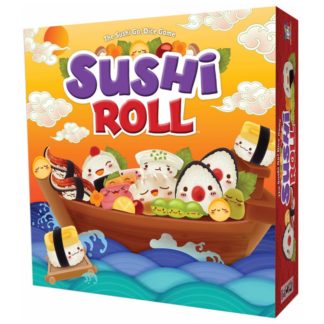